You are here: Home / News / Volunteer in Focus – Rod “Redman” Brett
Back 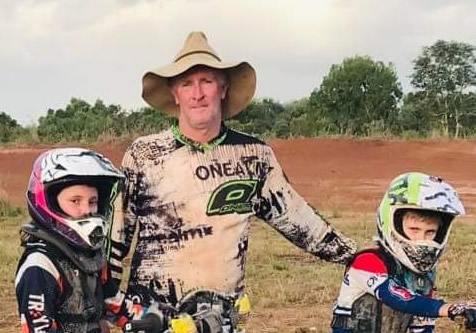 “It’s a funny club,” says Rod ‘Redman’ Brett of the Cape York Motorcycle Club at Weipa.
“It’s like a tide the way our numbers go up and down, but with a small population (circa 4000) to draw from and two different mine roster patterns that affect many of the members, that’s how it is.
The Tasmanian-born, 51-year-old who runs a local refrigeration business says he moved to Weipa and just never left.
“Well, I left a few times and kept coming back,” said Redman, “chasing job opportunities and eventually Weipa became home. I like the place. It’s a great spot to raise kids, it’s just a safe town with very little crime, and bikes and fishing and heaps of camping around the place.
“The club has about 25-30 active riders, but we can never get them all out at once.
“Covid really capped us and a lot of boys lost interest, but at the moment we’ve got a good crew again and the numbers are coming back.”
Part of the reason ‘the tide’s come in’ lately has been the regular coaching.
“I started running coaching evenings every Wednesday night,” said Redman, “so people knew the track would be open from after school until dark, every week. People responded and got their bikes out again.”
Redman’s coaching afternoon numbers went from just a couple of 50cc machines to 16 bikes in a session. “It was great. Every kid stepped up three levels, just simply from arse-on-seat time, and kids that you used to have to follow around with the buggy you now just let ‘em go and they reel off lap after lap.”
“Every 2-3 weeks we open up the track on a Saturday with a full prep and people love it – water’s a huge thing for us, we can’t ride without it.”
The club is in the process of trying to build up the numbers of qualified people to host racing events again.
“Five years ago we had the Croc Cup up here,” said Redman, “and everyone raved about our track, which is open, sandy and fast. Luke Weaver came up for that race and he still says it’s his favourite track.”
As the club looks to expand the opportunities of its members, driving-time and ever-improving transport infrastructure are both key.
“The other weekend we took seven of our members to Mareeba for Round 2 of the TNQs which was a big eye-opener, particularly for the four of us including me who’d ever raced motocross before.
“The Mareeba track quite was quite rutted and tight, and the juniors had never even seen 200 bikes before, or a 40-bike start grid!”
“Hopefully next year we can keep travelling and get enough officials together to race at our own track. It’s a lot easier to interact with the other clubs than it used to be… there’s only 200ks of gravel left between us and Cairns now!” 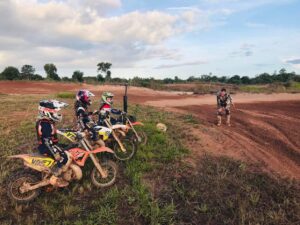 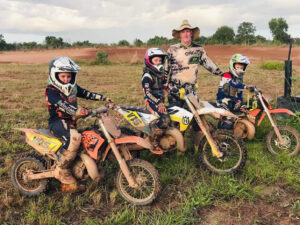