You are here: Home / News / Rider/Official/Clubbie/Racer Profile: Ashleigh Smith
Back 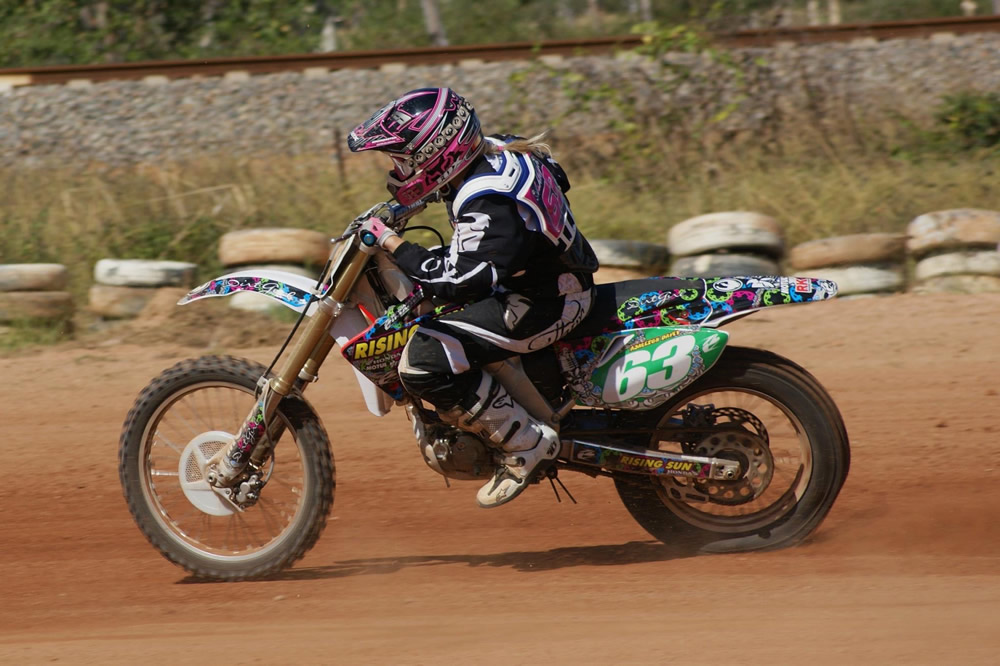 Townsville’s Ashleigh Smith juggles several roles at the track these days, volunteering as a Level 4 Race Secretary for both Speedway and Track, and serving as PR Officer for the North Qld Speedway Riders & Supporters Club. And when she’s not doing that, you might find her occasionally having a lap herself, or giving a few tips to her daughter Peyton before the next 50cc race. One thing’s for sure, any advice would be well worth listening to… you see Ashleigh is a former Australian Women’s Long Track Champion!

QWiM: Hi Ash, tell us a bit about Ashleigh the racer?
AS: I have been involved in motorcycling since I was 8 years old, racing dirt track and motocross. I got tired of watching my brother race really and we had been riding bikes since we were 3 so it was enough wait time I think! I competed until I was 20, when I was the Australian Women’s Long Track Champion and multiple Queensland and NSW Women’s Dirt and Long Track Champion.

QWiM: What got you hooked?
AS: The reason, as a competitor, why I loved the sport so much was for the mateship and the adrenaline rush – tell me, who doesn’t love the feeling you get as the gate is about to drop?!

QWiM: So at that time when you were racing for Australian championships, what sort of a racer do you consider you were?
AS: Hard but definitely fair. I was probably one of the nicest on and off the track, but I’d still take those small gaps and opportunities to get to the front too! I was definitely a determined rider, and I could gate well too.

QWiM: Do you have a fondest memory from that time? Like an experience, an achievement, a feeling of being on top of your game and your skillset, or a relationship or rivalry with other competitors?
AS: I had won quite a few QLD titles prior to 2009, but at the start of that season, I knew I was moving to the UK the following year (with my now husband, Kozza, for his speedway) so I wanted to win everything. And I did – an Aussie title, the two QLD titles and the NSW title. I also attended the AIS (for the second time, the first was an all female mx/enduro camp) but this particular year I was the only female selected for an elite dirt track camp, and I learnt so much. In my last few years of racing I was incredibly confident and knew that I had the skills to win. And I finally got the monkey off my back and made it through the heats to get into the Australian Pro Lites final in long track – that took me years, but I was super stoked and proud of that!
I’ve done three Aussie titles since I have been ‘retired’, just to get out and support the amazing womens class. I pulled a 2nd at one of them down in Tamworth, and I won a NSW title and a QLD title, which was cool. To be honest, at the race track, I was friends with everyone haha, I probably socialised too much! But my favourite rival was Megan Doyle (now Jerkic) – she was one of my best friends off the track and an unbelievable competitor. We battled each other for years and it was just always hard, clean, fair racing. Now we are both Mums and kick back watching our girls ride!

QWiM: And then you became an official?
AS: Yes, three years ago, as North Queensland was lacking in speedway officials so I decided to become an official – now I can still enjoy motorsport (nearly!) as much and help the next generation of racers.

QWiM: What female competitors really impress you these days, and why – you can choose any discipline?
AS: I try to keep as up to date as I possibly can with the females racing in the country, particularly in QLD. But the one name that stands out for me would be Charli Cannon – I have been to quite a few MX events and helped flag and she is something else, she is amazing! She has the skills and pace to go all the way to the World Championships. I don’t know her personally but I imagine she would ruffle a few feathers at every event she races in when she takes her helmet off and they realise she is female. She is kick ass!
For seniors, you can’t go past Briony Hendrickson. Bri has been a friend of mine for years and she is a fierce competitor! She has an impressive haul of championships to her name and I think she is a great role model to the young little superstar girls coming through like Anika Loftus – I think that is a name you will see in the future too! Also, the Goulding girls – Brooke (her husband Blake rides too) and her two girls Aaliyah and Charlotte drive far and wide around Aus to support women’s events and for Brooke to have stopped racing for so many years and come back and be right at the pointy end of all these championships she competes in is amazing!

QWiM: Same question, but with male competitors?
AS: Hmm, that’s a tough one! I would say in the junior category, probably Lucas Quinn. I have seen him on dirt track, swinging on the back of a sidecar and also on the road and his skills just slide swiftly into each category. In motocross, probably Heath Fisher – he is super impressive at such a young age. And he is effortless on the bike when I have seen him in action!! Senior males is tough, there is so much talent. Some young guns coming through and really making a mark to me are guys like Jedd List and Jacob Hook – both speedway guys.

QWiM: What is it you love about Speedway in particular?
AS: Speedway is such an amazing sport, the athletes who race are incredibly talented and they put so much time and effort into it. The thrill of watching four bikes with no brakes compete for thousands of fans is exhilarating, the way these guys and girls are going through gaps that you wouldn’t even consider an option is just phenomenal.

QWiM: And you have another role at the track these days?
AS: Haha yes, not only am I an official, I am also a 50cc parent to my daughter, who also has a junior solo that my Dad built custom to spec for her. It is literally a 500cc solo shrunk down to size with a 50cc engine in it. He has even built my 3 year old, Ryder, an even smaller version! Do you think he hopes they race speedway too? Haha. I just really hope both my kids get the same enjoyment out of our great sport that I always have.

QWiM: What’s your relationship with riding and racing these days?
AS: We ride for fun really, its hard with everyone in the family wanting to ride now! I will do maybe one or two club days a year, normally with my bestie Sam (Van Eerde), and we always try to make the Townsville MCC Ten a Team tournament a must-do event, I have never had so much fun racing as that event, it is awesome!! But for now, I am happy watching, volunteering and helping where I can 🙂

Pics: 1) With numerous state titles and a national title under her belt, Ashleigh certainly knows how to chuck it sideways. 2) Her daughter Peyton is following in Mum’s tyre tracks. 3&4) Ashleigh and her best friend Samantha Van Eerde (cousin to rising road racer Billy Van Eerde) with whom she has shared a parallel journey through racing, motherhood, becoming an official and these days, every now and again, pulling the helmet back on to ride in fun events. 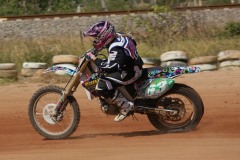 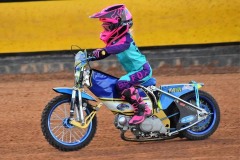 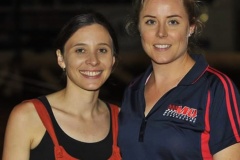 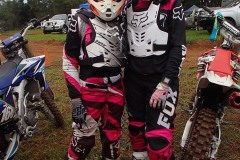