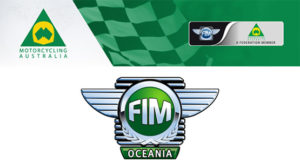 Motorcycling Australia is pleased to announce the launch of the new FIM Oceania official website.

For those who need a quick introduction about what is FIM Oceania.

FIM Oceania works in partnership with the two member nations (federations) and FIM International to provide a consistent strategic plan for motorcycle sport within the Oceania region. In addition to working with other FIM Continental Unions around the world.

The FIM Oceania Board of Director’s consists of five members;

FIM Oceania operates with its own Statutes which are formed alongside FIM International goals and strategies.

FIM Oceania further focus is on the development of Senior Officials in the FIM Oceania region. Using FIM Oceania events to create opportunities and a training pathway towards FIM Officials Superlience and FIM World Championship events.

The new FIM Oceania website will provide a location for news, information and education on FIM Oceania and FIM.

The all new FIM Oceania website can be viewed via – www.fimoceania.org.