You are here: Home / Motocross / Drew Wraps up Queensland Motocross Championship
Back 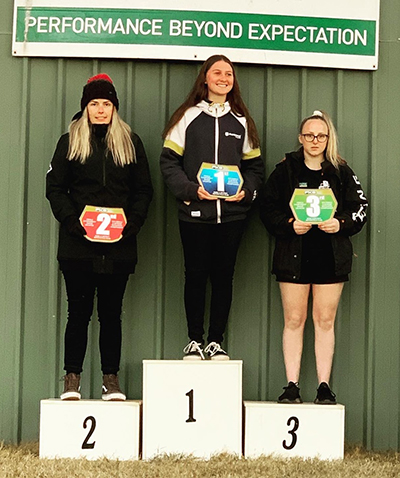 Sixteen-year-old senior Tahlia Drew has wrapped up a stellar rookie season by winning the Women’s Unlimited class of the Queensland Women’s and Vets Championship at Roma.

Drew won the first two motos, but after a fall in the third was forced to dig deep to fight off challenge from 36-year-old Qld MX racing legend Tamara Gray, while rising local ace Hayley Miller was third.
“It felt unreal to stand on top of the podium,” said Drew. “There was definitely some tough racing with Tamara there, though it would have been good to have Chelsea (Carter) and Nicole (Kenny) there to see how I would go against both of them. I knew I just had to play it safe in the last race, but a crash on the first lap left me fighting for the championship right down to the last lap.”
Ten-time Queensland Champion Gray, who had entered the event on a whim just a week earlier, found herself competitive speed-wise but a little short on the conditioning front, and called on every ounce of her experience to win the final moto after her stamina had run dry.
“I’m feeling my age today,” said Gray. “The last time I did a Queensland Champs seriously was in 2012 and I was glad to be competitive, but I was very underdone. A week earlier I rode out at QMP and thought I was riding pretty good, so I entered, having never done a practice start on the 350, and not knowing how to use the start function!
“The last one was my standout race. I passed Tahlia between the first and second turn and then she fell. I just had my head down counting laps, and didn’t want to know where anyone was. I couldn’t breathe because it was so cold and I was just absolutely buggered. I so happy to see that last lap board!
“I was pretty chuffed to win that race too,” said Gray, who also won the Female Veterans 35+ Division from Jackie Joyce and Megan Janulis.
Though more than a few competitors felt the chill, the event was a great one with awesome competition all the way through the title and support classes, according Roma club’s Katrina Ayers.
“The Vets was a really good addition to the event and the comments were that the track was technical and well prepped,” said Ayers. “We had zero injuries over the two days, which was a good indicator that the track suited the event.
“We had many riders camp and support the club buying meals and creating a great atmosphere, and there
were also a lot of people who stayed in motels and had dinners in town, so it’s great when our sport gets to support the community this way.
There were five Men’s Vets classes and a host of junior and support classes, and you can see all the results right here :