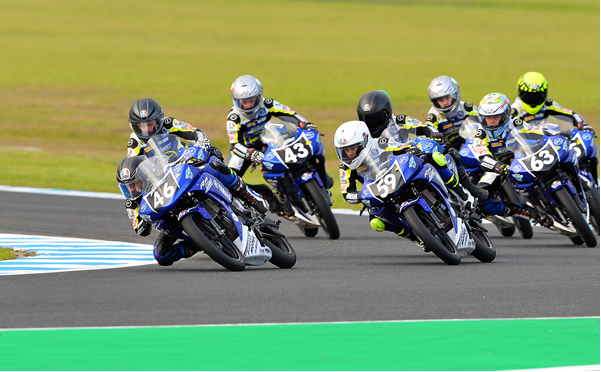 Congratulations to the six Queenslanders who will take part in this year’s series!

Officially supported by the Fédération Internationale de Motocyclisme (FIM), FIM Oceania and recognised by Dorna Sports sl, as part of the Road to MotoGP program, the OJC program is already proving to be the international springboard it was intended to be.

Year 2021 will see 13 new riders join the OJC family, with all 20 riders lining-up on track at Round 1 of the ASBK at the Australian All Wheels Race Fest, Phillip Island Grand Prix Circuit, February 19-21.

The youngest rider joining the paddock is 11-year-old Elijah Andrew from Marayong NSW, with the eldest being newcomer Tate McClure, 15, from Mitre, Victoria, and our first Tasmanian competitor, 11-year-old Oliver Skinner from Brighton.

The Oceania Junior Cup is the perfect feeder program into the ASBK Supersport 300 class and YMF R3 Cup.

In addition, such is the talent in the class, riders have been selected to compete in international competitions such as the Asia Talent Cup, Red Bull Rookies Cup, and European Talent Cup.

Riders competing in the 2021 championship will receive elite coaching to help develop their bike skills and technique, health and fitness, sportsmanship, and off-track activities such as media and fan engagement.

“It is fantastic to see the program grow from strength to strength, and to have another full grid of young talented and enthusiastic riders, who like ASBK fans, can’t wait to get the season under way,” he said.

“The bLU cRU Oceania Junior Cup provides spectacular close racing, as we saw last year, and no doubt the 2021 OJC Cup will go down to the wire again with 20 riders competing to be crowned 2021 Champion.”

Keep up to date with the latest news on the bLU cRU Oceania Junior Cup via https://www.asbk.com.au/about-asbk/oceania-junior-cup/ and following OJC on Facebook and Instagram.